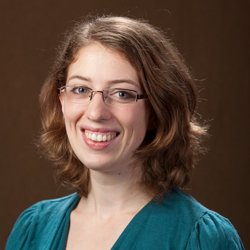 Their teamwork, along with a University-wide accessibility initiative, produces better and richer inclusion for students with disabilities on campus and in their distance learning programs.

Laura, who received her library degree from Indiana University, and then moved to WKU several years ago,  says that what draws librarians into the field is that “people are passionate about providing quality information resources to everyone, from whatever economic background. Public libraries are free. This (working on accessibility) is a logical extension of that.”

“There is a whole population born with disabilities and then there are the many who are aging and their eyes aren’t working as well. I had to redo my own glasses prescription recently at the ripe old age of 32!”

Shaden was practically raised into her current position. She was born in Bowling Green, Kentucky to a family who had immigrated from Syria. Her mother, Huda Melky (now retired) was the long term ADA Compliance Director, Equal Opportunity Director & Title 9 Coordinator at WKU. Huda developed the policies and procedures for ADA compliance that are now the backbone of a university wide initiative for accessibility. Shaden says “my mother started ADA here with Section 504 in the early 90’s, then we updated to Section 508. It’s taken us 20 years to get here.”

Laura chimes in, “It’s almost like ‘why shouldn’t we work on this?’ We work tirelessly to provide access to every other patron group!”

Shaden has merged two life long interests, health care, which consumed her earlier career, and technology.  “One of my biggest things is I like to help people. That’s why I went into health care. Technology is my strength.  By incorporating the two I found my niche.  It’s wonderful for me! I’ve been doing this for 3 ½ years. It’s always a challenge, but then we work it through and meet the challenge.”

An early experience with her gymnastics coach still resonates with her. “I was a gymnast when I was a kid. The coach had gymnasts with Down’s Syndrome or something like that. I still remember watching the smiles on their faces, showing how much they could accomplish. It sticks with me until today.”

The university wide initiative for accessibility has objectives that cover three main areas:

The accessibility team which includes the university attorney,  a website ADA consultant, someone who works on the WKU version of the OU Campus™ (@ 700 higher education organizations use this CMS) and a WKU Distance Learning representative, as well as Shaden.

Part of her contribution is to share accessibility reports she has generated using HiSoftware. This is also a time for her to advocate for adding resources like the graduate student they hired through Student Accessibility Resource Center (SARC) who was blind and helped enormously with testing using JAWS screen reader.

“If Distance Learning didn’t have Sam to help with that they wouldn’t have discovered several issues. We’ve incorporated everything he discovered into distance learning and into the library.”

Adverse legal actions at another universities prods similar organizations to take concrete action. When Penn State reached a settlement against a lawsuit which claimed lack of access for blind students in multiple software areas, WKU took notice. This led to the decision to include a university wide scanning tool. There are a number of tools on the market which can be used to automatically scan many webpages at a time and provide accessibility audit reports.

“We looked at Deque, which we thought was the best option, but that was out of our price range (at $150K annually). HiSoftware owned by Cryptzone won out. At $20K to purchase plus $1500 annually to update we decided we could work through some of the kinks.”

“In all honesty,” says Shaden, “HiSoftware has been good to us. We run scans on the library databases. We do a mock queries, taking each database, search for the term and locate the resources with the most varied content, like PDFs, video files, etc. If anyone asked I would say that doing a local scan is easiest for databases. We did go through a lot of trial and error with both Firefox and Internet Explorer (IE) scanning systems. There were a lot of glitches and we even got viruses. HiSoftware had advocated for using Selenium, but their own scanning system used through IE proved to be the best. We then went with local scanning as IE is being deprecated.”

Even good software has glitches

HiSoftware generates detailed summary reports which Shaden shares with both the WKU accessibility committee and with vendors to explain the issues with existing software. When she first sent the PDF reports to the vendors they sent back notes. “We can’t open the file!”

After opening a ticket with HiSoftware, both Shaden and the company spent 6 long months testing and trying repeatedly to understand why the reports she could see on her computer were not translating properly to the vendor.

“It turned out that the reports were browser based and needed a special API in the HiSoftware package so we could share the PDFs!”

With that API in place all is well, except… that, because the reports are so technical and detailed Shaden has to produce another “light weight” version for some of the vendors who do not have technical staff on hand to fix the problems.

Laura adds, ” Some vendors would be thrilled if you tell them the line of HTML code they need to fix. Others will have no way of using that information.”

The good news — over time the reports have shown a lot of improvement in the software WKU uses. So, the HiSoftware investment, with Shaden’s inputs and modifications, has really paid off.

VPATs – something to chuckle over

VPATs (Voluntary Product Accessibility Templates) are documents tied to Section 508 compliance. In short, a vendor may be asked by a procurement officer, or within an RFP, to add a VPAT for their software products when bidding on a contract. This VPAT should have resulted from the vendor testing their software against the 508 standards and reporting whether or not the product successfully meets them.

“Some of the VPATs are very entertaining,” says Shaden with a grin. “When I’m having a bad day I just pull them out and have a look at one of them.”

Laura adds, “It’s really obvious that some of the vendors have a team that works on these, like EBSCO and Elsevier. They are actually familiar with the concepts. Others don’t have a clue as to what we are asking for. I really do think their sales reps fill them out!”

A couple of years ago Laura and Shaden collaborated to check the library database software products against the VPATs provided by vendors. In an extensive and well researched article she shared the results with the library community. Shaden used HiSoftware to check databases against 17 separate VPATs.

Analysis was done (16 out of 17 VPATs proved to be at least partially inaccurate in their self-assessment of their products.) Laura published an article in Library Hi Tech in 2015 with all the details.

“I’ve also compiled some VPATs I have gotten permission to post publicly on a website for Library Accessibility. We are looking for a more permanent home and soliciting up-to-date VPATs to add so that the whole library community can see how the vendors are faring in this area.”

Laura’s responsibilities have changed over the past three years she has been with WKU. While she still participates in accessibility issues, this primarily means that she is involved in procurement, budgeting, consulting with Shaden and presenting at a couple of conferences every year.

“Every year I train librarians on the subject at one or two conferences. We talk about what we are doing here at WKU; what they need to be doing. There is a LOT more interest than there was even a couple of years ago. More people sign up for my workshops. More people stop by after the presentations. And I am not the only one presenting on the subject. There might be 4 or 5 different people involved,” says Laura.

“A great example is the Kentucky Convergence Conference. A couple of years ago we sent in a proposal, which was not accepted. This year the whole conference theme is: ‘Making Higher Education Accessible.”

Another conference Laura presented at this past April was the Electronic Librarian Resources (ER&L) Conference in Austin, TX.  “We did a 4 hour hands-on workshop on how to make resources accessible in the library. I was so happy that there were 3 other programs on accessibility at the conference. It was great that they were librarians that I’d never even met! People are working on this!”

Librarians who have Electronic Resources or Distance Learning responsibilities and titles are the center of the action right now. Very rapidly this is becoming a sought after skill set throughout the library eco-system.

The long term WKU accessibility efforts show how complex the effort is to ensure inclusion for all students at university level with regard to software accessibility. It’s pricy, it’s an ever fluid target and it takes a dedicated team to do it right.

Fortunately WKU has two excellent advocates in Laura DeLancey and Shaden Melky! They are leading the way, building on 20 years of ADA compliance and efforts at the school. And there is no end in sight.